END_OF_DOCUMENT_TOKEN_TO_BE_REPLACED

Are you a fan of delicious foods and tasty wines? Are you a fan of the Walt Disney World Resort? Well if you answered yes to both questions then Epcot is a must for you! Every year towards the end of August, Epcot puts on one heck of a festival that includes wines, gourmet tapas dishes and art from around the world. It’s called the International Food & Wine Festival and has been going on for years.

This is a festival for the connoisseurs and foodies who enjoy taking a tour of the world right in the comfort of Disney. For a few months out of the year Epcot puts on a party of parties all day long. For the price of a daily admission ticket you can enjoy the sights, sounds and flavours as you explore the different cuisines from around the world. Vineyards and breweries from around the globe are center stage during this once a year event.

Executive chefs from the Walt Disney World Resorts prepare regional dishes while pairing up wines and beers that make your experience one to savour! As you wander through the theme park you will encounter different cuisines at different locations. As an example if you are in France or Germany, you will be a guest of that country and served local dishes that represent their country all the while being able to sample their regional wines and beer.

The downside is that this isn’t free and can get quite costly. The best way to approach this is to stop at the very first food kiosk and get yourself a prepaid wristband and preload it with as much money as you see fit. I normally will put $50 on mine and that will get me to at least the America pavilion which is the halfway point on the World Showcase at the back of the park. By this time you are feeling pretty good and might want to just put another $50 onto your wristband again to finish strong!

This event is a event worth Uber-ing, staying on property like at the Boardwalk, Swan or Dolphin which are staggering distances from the back entrance of Epcot. If your partake in the fermented beverages you will not want to be driving believe me. This is a great event to share with friends and families and probably should not be a festival that you would want to bring your kids to as people at this event can get pretty happy to say the least but in a good way. Here is a link to their current 2018 menu so have a look and see what you think ~ Epcot Food & Wine Menu 2018

If you plan on attending this event and need Epcot tickets or Disney World tickets please visit our website at www.officialticketcenter.com or by calling us toll free at 1-877-406-4836.

Have you drove by Epcot in the past few weeks and noticed a big o’le building to the left of Spaceship Earth? Well that big thing everyone is looking at and talking about is the all NEW Guardians of the Galaxy ride and I can’t wait to experience it! Epcot was kind of in a rut for awhile and many visitors were asking if Epcot had just become a Festival theme park. Seems they were only rolling out the carpet a few times a years for their Wine & Food Festival as well as their Flower & Garden Festival. To be honest it was getting kind of stale and really did not offer anything new until now.

The area where the new ride will be is over where Ellen was next to Mission Space. That area was like a place where if you wanted to go take a nap and not be bothered by anyone, this was the place to do it. Now it has become something very busy and looks to be just more than a ride, maybe even a small little land into itself. I know Walt would be pleased with this space aged addition as he dreamed of this whole park being like that and not what it has become.

Guardians of the Galaxy is nothing new but it is so hot right now as Mugatu would say so hopefully nothing knocks it too far back to where visitors will be like what the heck is a Groot? I’m pretty positive that this will not be the case and this little corner of Epcot will be everyone’s newest favorite piece of the park. I am really hoping for some new eateries keeping in line with the whole space theme and maybe a sit down restaurant.

All in all this is going to be a much needed addition to Epcot that is for sure! If you have been over there within the past decade, you will agree that nothing has been added to the theme park and if you have been reading any Disney related blog, people have been demanding that something be added to Walt’s treasured park for quite some time. I’m glad to see it finally happening. If you are planning to visit anytime soon be sure to check out “The Official Tickets Center” for all of you Disney tickets and discounts. If you have been paying attention lately, you would notice a great disturbance in Walt Disney World’s Force. If one would look for a minute over at Hollywood Studios, you would see a major Pixie Dusting taking place in the form of a huge expansion of Toy Story Land. For the past few years Hollywood Studios has been going to the extreme of updating this once not so popular theme park. Guests have been waiting patiently for this and Disney is guaranteeing a home run with this newest addition!

Over the past few weeks guests have been privy to a soft open of this new land. You won’t hear about it but you can sure read about it as Disney has been slowly and quietly bringing in media and bloggers to start building the excitement for what it hopes to be a big winner for their park. I have seen pictures and videos of the rides and food stands, but I have yet to go myself. Next week will be their official media event and yours truly will be there reporting on everything.

I am a huge Disney fan and I hope to be able to see all of my favourite characters as well as shrink down to what is the end idea of being one of Andy’s toys. The whole gist of their new land is to be one of Andy’s toys and for the guest to be able to enjoy a day in Andy’s backyard. I have seen the a few of the rides like Slink Dogs rollercoaster as well as a few walk up eateries and I can’t wait. It has been long overdue and I hope that Disney hits a homerun with this much needed addition!

Disney has great visions for all of their theme parks but Hollywood Studios I have a feeling will be a new diamond on Mickey’s crown especially after they add the much anticipated Star Wars Land. Once they have these two new additions they will be a Force to reckon with no pun intended…lol The only thing that I would have added if I were Disney is possibly a Toy Story Resort. Could you imagine how cool that would be for the kids? Hopefully they read this and make it happen. Stay tuned for after party reports and if you should every need discount Disney tickets to any of the parks, please visit The Official Ticket Center for all of your ticketing needs.

Here in the U.S., Toy Story Land is set to open to guests at Disney’s Hollywood Studios on June 30, 2018. This land will bring with it all the fun, imagination and beloved characters from the “Toy Story” films.

When it opens, guests visiting the land will “shrink” to the size of a toy and join in on the fun Woody, Jessie, Buzz, and Andy’s other favorite pals are having in Andy’s backyard. Here, guests can take a ride on Slinky Dog Dash, a roller coaster Andy has assembled from his Mega Coaster Play Kit and topped off with Rex and Jessie, while Slinky serves as the coaster vehicle. (See photo above for a new look at the track).

Families will also be able to take a spin on Alien Swirling Saucers, a galactic play set that Andy won from Pizza Planet. Here, adorable little green aliens swirl about in their flying saucers with guests in tow in their rocket ship toys, while “The Claw” hangs overhead.

Guests can also walk through a new carnival game box to experience Toy Story Mania!, which has been a guest-favorite attraction at the park since it opened in 2008. Now expanded with a third track, the popular attraction will put even more guests in the action taking aim at 3D objects – using everything from baseballs to cream pies – in a variety of whimsical, fast-paced games.

Woody’s Lunch Box will serve up tasty meals and old-fashioned soda floats from a walk-up window setting. The entire land will serve as a visual celebration of toys, with Crayons, Cooties, Green Army Men, Rubik’s Cubes, Tinkertoys, and other familiar toys and game pieces incorporated into the land’s design.

Bob also shared this amazing behind-the-scenes video that shows the progress that’s being made on Toy Story Lands at both Disney’s Hollywood Studios and Shanghai Disneyland. (Toy Story Land at Shanghai Disneyland will include three attractions – Rex’s Racer, Slinky Dog Spin and Woody’s Round-Up – and is on track to open on April 26, 2018). Take a peek at both in the video above.

Which attraction are you most looking forward to experiencing when Toy Story Land opens this summer at Disney’s Hollywood Studios – or will you make the trip to Shanghai Disneyland? Tell us in the “Comments” section below! To purchase your discount Disney tickets, please call our office at 1-877-406-4836. 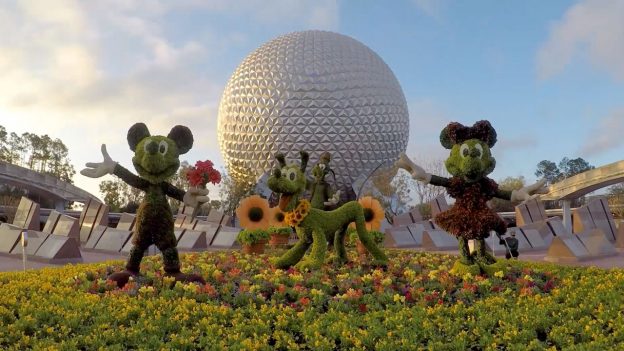 Some say Florida doesn’t have an official “Spring” season, but I beg to differ.

Spring most definitely begins in Florida when the more-than-30-million blooms come alive at the Epcot International Flower & Garden Festival.

This year is the Festival’s 25th year, and the park again is overflowing with the brightest plants, flowers, trees and topiaries adorning both Future World and World Showcase.

Here are some of the top things you shouldn’t miss at the Festival:

If you’re coming out to this year’s festival, plan on more than one day to see, smell, hear, touch and taste everything. You surely can’t do it all in one!

For more information about the Epcot International Flower & Garden Festival, call us at 1-877-406-4836 or for discount Disney tickets to this event.